Review: A Clash of Kings by George R.R. Martin 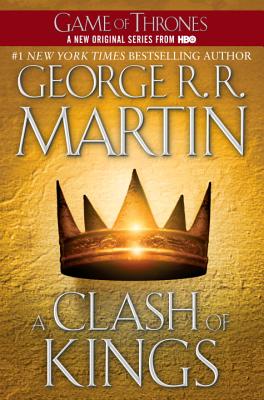 Title: A Clash of Kings
Author: George R.R. Martin
Series: A Song of Ice and Fire #2
Genre: High Fantasy/Dragons/Magic
Publisher: Bantam
Publication Date: January 1st, 2003
Edition: Kindle Edition, 770 pages
Source: Library
Purchase: Amazon US | Barnes & Noble | BAM | Book Depository | Bookshop | Powell's
Synopsis:
A comet the color of blood and flame cuts across the sky. Two great leaders--Lord Eddard Stark and Robert Baratheon--who hold sway over an age of enforced peace are dead, victims of royal treachery.
Now, from the ancient citadel of Dragonstone to the forbidding shores of Winterfell, chaos reigns. Six factions struggle for control of a divided land and the Iron Throne of the Seven Kingdoms, preparing to stake their claims through tempest, turmoil, and war. It is a tale in which brother plots against brother and the dead rise to walk in the night.
Here a princess masquerades as an orphan boy; a knight of the mind prepares a poison for a treacherous sorceress; and wild men descend from the Mountains of the Moon to ravage the countryside. Against a backdrop of incest and fratricide, alchemy and murder, victory may go to the men and women possessed of the coldest steel...and the coldest hearts. For when kings clash, the whole land trembles.

It took me about a month to read this book, and over a week to write this review.
While the show is still in my mind a bit, I don't think it will ever "go away" enough for me to not read these books. I'm just going to take my time since there's no date on when the 6th or 7th books are coming out. I think one a year will be a good pace to read them.
Anyway, on to the review.
In a lot of ways, this book wasn't as compelling as the first. I felt some characters were given too many POV chapters, or maybe I just didn't enjoy those POV chapters. Tyrion had what felt like the most POV chapters, and were 50/50 as far as enjoyment goes. He's far less likable in the books than his character is in the show. Catelyn's chapters were probably the least enjoyable, and I wish Arya had more POV chapters. Jon's were also a little boring at times, I liked Bran's the most. We didn't get any for Robb, and I wish we had. Theon's were the second least enjoyable. He's such a putz, and far more whiny in the book than he was in the show. I'd feel sorry for him because his father is so cold towards him, but he the decisions and choices he makes... I just can't be bothered to feel bad for him. Dany had the least amount of chapters, and I would have liked to read more. The next book will likely have more for her.
It is unavoidable not to compare the book with the show, as it was unavoidable for people who read the books prior to the show coming out to not compare. I did enjoy this book, I just think I'll just have to buy them so I can read them at my own pace, rather than borrow them and feel like I need to rush to read them because I borrow ebooks and they get auto-returned when the time is up. I just don't know what editions I should get, or if I should just wait until I know all of them will get released, and then buy them. I do hope that he finishes the series. I do think it would be kind of funny if he finishes the series, but has it set up that the books won't be released until after he dies, because people are jerks and for years at conventions asking him if he's going to finish the series before he dies. Or as he finishes the books, makes no big announcement that they've been published but they just show up in stores.
Posted by Marie - Pages To Explore at 2:59 PM