I feel like everybody has read this but me. I've had this on my kindle for a while, but was hesitant to read it because everybody also seems to love it, and whenever a book is really hyped up, I worry that it won't live up to the expectations presented to me. It's also thick, as in dense. Or I expect it to be dense. It's the longest book I've ever read at over 1k pages. This wasn't on my list of books I wanted to read soon, but since I have no idea when I will be getting Well of Ascension back from the library, I figured I might see if I can get to possibly Sanderson's most popular series. I don't have any of the other books in this series. But if I like this one, I might put the others on my wishlist and buy them. I can't see me getting through the other books in this series from the library. I'm pretty sure the other books in this series are longer than the Mistborn books. Anyway, I hope I can get to it soon, and I really hope I like it.
Synopsis:
Roshar is a world of stone and storms. Uncanny tempests of incredible power sweep across the rocky terrain so frequently that they have shaped ecology and civilization alike. Animals hide in shells, trees pull in branches, and grass retracts into the soilless ground. Cities are built only where the topography offers shelter.
It has been centuries since the fall of the ten consecrated orders known as the Knights Radiant, but their Shardblades and Shardplate remain: mystical swords and suits of armor that transform ordinary men into near-invincible warriors. Men trade kingdoms for Shardblades. Wars were fought for them, and won by them.
One such war rages on a ruined landscape called the Shattered Plains. There, Kaladin, who traded his medical apprenticeship for a spear to protect his little brother, has been reduced to slavery. In a war that makes no sense, where ten armies fight separately against a single foe, he struggles to save his men and to fathom the leaders who consider them expendable.
Brightlord Dalinar Kholin commands one of those other armies. Like his brother, the late king, he is fascinated by an ancient text called The Way of Kings. Troubled by over-powering visions of ancient times and the Knights Radiant, he has begun to doubt his own sanity.
Across the ocean, an untried young woman named Shallan seeks to train under an eminent scholar and notorious heretic, Dalinar's niece, Jasnah. Though she genuinely loves learning, Shallan's motives are less than pure. As she plans a daring theft, her research for Jasnah hints at secrets of the Knights Radiant and the true cause of the war.

Review: The Rage of Dragons by Evan Winter 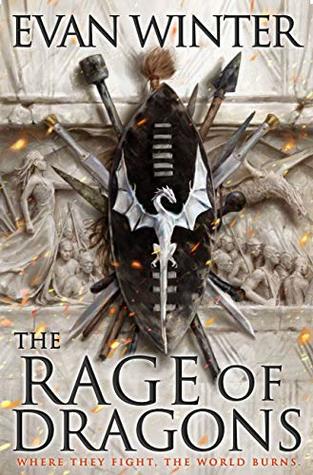 Title: The Rage of Dragons
Author: Evan Winter
Series: The Burning #1
Genre: Epic Fantasy/War
Publisher: Orbit
Publication Date: February 12th, 2019
Edition: Kindle Edition, 578 pages
Source: Library
Purchase: Amazon US | Barnes & Noble | BAM | Book Depository | Powell's
Synopsis:
The Omehi people have been fighting an unwinnable fight for almost two hundred years. Their society has been built around war and only war. The lucky ones are born gifted. One in every two thousand women has the power to call down dragons. One in every hundred men is able to magically transform himself into a bigger, stronger, faster killing machine.
Everyone else is fodder, destined to fight and die in the endless war.
Young, gift-less Tau knows all this, but he has a plan of escape. He's going to get himself injured, get out early, and settle down to marriage, children, and land. Only, he doesn't get the chance.
Those closest to him are brutally murdered, and his grief swiftly turns to anger. Fixated on revenge, Tau dedicates himself to an unthinkable path. He'll become the greatest swordsman to ever live, a man willing to die a hundred thousand times for the chance to kill the three who betrayed him.

Top Ten Tuesday is an original feature/weekly meme created by The Broke and the Bookish,
Now, hosted by Jana over at That Artsy Reader Girl
To take part, just pick your top ten, and add the link here.

I have hopes for this summer. School is out this Wednesday, and my day well less stressed at the very least.
This list is subject to change. I recently took a lot of books off hold at the library. I was overdoing it a little as I still have unread books on my shelf that I've been avoiding. Some of them for years. But the ones I do have on hold at the library, I'm not sure when I will get them. They are projected to take 6 weeks (two are graphic novels so those will be easy to get through) the top one in the library category is one I've only just started. These aren't the only books I want to get through this summer. And the jury's out on if I get any of the ones I won read. I might just keep doing what I've been doing since I realized I can borrow Ebooks from my library and just keep requesting books.
I have another book on hold, but I have no idea if I'll get it finished, I really want to. I started it a few months ago but my borrow timed out before I could finish it, so I had to put it back on hold. The wait time for that is a way out. Hopefully, I can get to it this summer. If not, I might just buckle down and buy the series so I don't have to wait at all.
Read more »
Posted by Marie - Pages To Explore at 10:16 PM 7 comments:

Synopsis:
When the ancient evil of the Blackbringer rises to unmake the world, only one determined faerie stands in its way. However, Magpie Windwitch, granddaughter of the West Wind, is not like other faeries. While her kind live in seclusion deep in the forests of Dreamdark, she's devoted her life to tracking down and recapturing devils escaped from their ancient bottles, just as her hero, the legendary Bellatrix, did 25,000 years ago. With her faithful gang of crows, she travels the world fighting where others would choose to flee. But when a devil escapes from a bottle sealed by the ancient Djinn King himself- the creator of the world- she may be in over her head. How can a single faerie, even with the help of her friends, hope to defeat the impenetrable darkness of the Blackbringer?

Top Ten Tuesday: Books I Love, and Want More That are Similar

Top Ten Tuesday is an original feature/weekly meme created by The Broke and the Bookish,
Now, hosted by Jana over at That Artsy Reader Girl
To take part, just pick your top ten, and add the link here.

This was a fun topic, but I had a hard time picking books. I read a lot of fantasy, and even though I also try to read less mainstream books, a lot of the same themes and tropes are still used. Covers are linked to their Goodreads page, I could only think of nine.
If you know any books that are similar to these, feel free to leave them in the comments.