Review: A Curse So Dark and Lonely by Brigid Kemmerer 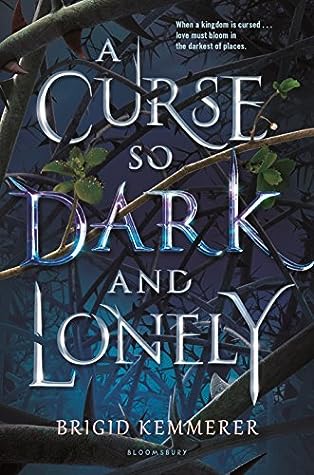 Synopsis:
Fall in love, break the curse.
It once seemed so easy to Prince Rhen, the heir to Emberfall. Cursed by a powerful enchantress to repeat the autumn of his eighteenth year over and over, he knew he could be saved if a girl fell for him. But that was before he learned that at the end of each autumn, he would turn into a vicious beast hell-bent on destruction. That was before he destroyed his castle, his family, and every last shred of hope.
Nothing has ever been easy for Harper. With her father long gone, her mother dying, and her brother barely holding their family together while constantly underestimating her because of her cerebral palsy, she learned to be tough enough to survive. But when she tries to save someone else on the streets of Washington, DC, she's instead somehow sucked into Rhen's cursed world.
Break the curse, save the kingdom.
A prince? A monster? A curse? Harper doesn't know where she is or what to believe. But as she spends time with Rhen in this enchanted land, she begins to understand what's at stake. And as Rhen realizes Harper is not just another girl to charm, his hope comes flooding back. But powerful forces are standing against Emberfall . . . and it will take more than a broken curse to save Harper, Rhen, and his people from utter ruin.

Beauty and the Beast is my favorite fairytale, which this is a retelling of. I have read 4 or 5 BatB retellings, and this one of my favorites. It takes the classic story and really brings something new, I love that.

I really liked Harper as a heroine. She is smart and doesn't take anyone's BS. She never gets weak in the knees for either Rhen or Gray. She's also an unlikely heroine. She has Cerebral Palsy. Something that I actually knew little about, I liked learning more about the condition and having my assumptions about it corrected. They weren't negative, just uneducated assumptions.

She is not a passive character. She is a strong character with out being a #strongfemalecharacter. She knows her physical limitations, but also knows how to work around them, but she's also not useless. She wants to learn more and is willing to try until she succeeds. She is headstrong, smart, kind, fierce and a badass.

Rhen was also a great character. He's not "typical" for the beast character in this fairytale. He's not a douche who is trying to manipulate the girl into loving him. He's been living in a repetitive cycle of death for years. Things never changing except for the monster the becomes at the end of each season before it starts all over again. Stuck at 18 until he breaks the curse, or until the Monster consumes him. By the time we meet him, he seems resigned to never breaking the curse. He certainly wants her to fall in love with him. But he is far from pushy.

Gray, our loyal and sole Royal Guard. He might be my favorite character.
He was such a fantastic part of this book. He was willing to throw himself into danger for either Rhen or Harper. There was a moment when I thought they were going to have Harper fall in love with Gray, but that was kind of overshadowed on all fronts. (mild spoiler maybe...)
Harper doesn't seem to fall in love with either of them. She cares deeply for Rhen, Gray and the people of Emberfall. But that's about it.

I really loved the second half of the book more than the first half. The first half was introducing characters and the world, but the second half was about the world of Emberfall. It was about Harper connecting to that world. And her growing to care and become conflicted on what choice she needed to make of where she's going to stay.

Another great thing in this book was the family aspect with Harper's older brother and their ailing mother. For me it added something more to her character. In the OG tale, Belle doesn't seem too worried about her father after she takes his place, even though they are all each other has. In this book, Harper desperately wants to get back to her family and was even willing to bargain with the Enchantress who cursed Rhen to get there (You can guess how well that went).

I'm starting to run out of things that aren't spoilers. There is a lot to love about this book, and I can't wait for the sequel.
Posted by Marie - Pages To Explore at 6:08 PM