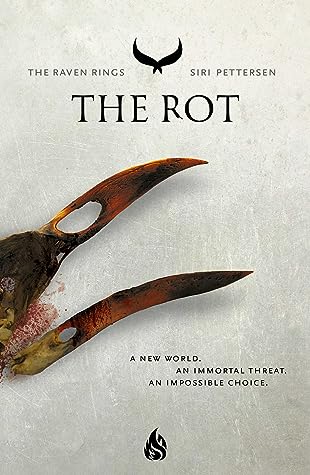 Title: The Rot
Author: Siri Pettersen
Series: The Raven Rings #2
Genre: Fantasy/ Adventure/ Romance
Publisher: Arctis
Publication Date: October 5th, 2021
Edition: ebook, 512 pages
Source: NetGalley
Purchase: Amazon US | Barnes & Noble | BAM | Book Depository | Bookshop | Powell's
Synopsis:
She has no identity. No family. No money. But the fate of the worlds rests in her hands.
Hirka is stranded in a rotting world, with nothing but a raven and a notebook to connect her to the life she left behind in Ym. She came in search of her family, believing that she could protect Rime and the rest of Ym from the ancient evil of the blind. Instead, what Hirka finds in this new world are people willing to do anything for the blessing—or the curse—of eternal life. And for Rime, the threat of the blind is only growing stronger …
Separated by worlds, unsure who to trust, and in danger from all sides, Hirka and Rime fight to end a thousand-year quest for power and revenge—and, maybe, to find a way back to each other.

So I was completely wrong when it came to where this book was headed, in the best way possible. This series is nothing like anything I have read before, I love it. Book one is set in a kind of medieval fantasy world, and at the end of the first book, Odin's Child, I wasn't sure where things were headed. I assumed that we'd follow Hirka as she discovered her new world. But beyond that, I had no idea what was going to happen. I hoped we'd still follow Rime in Ym, but I still had no idea where things how things would unfold. I love that nothing in this series goes as expected.
This book picks up six months after the ending of the first book and Hirka is in a pretty dark place, emotionally. She is still learning the language and the customs in England while sleeping in the belltower of a church. She honestly picked up the language pretty fast in my opinion. She still struggles with some words and doesn't know the meaning of everything, but she can carry a conversation fairly easily. And it makes me wonder what the original text had her learning. This is translated work from Norway, so I'm just curious.
There are a lot of big reveals in this book, things that come to light, and thousand-year-old secrets and lies uncovered. Rime learning the truth about the Seer, the Ymling's God, and who he really was and what he did. Hirka learning who she is, and what she was meant for, and where that leaves them and their future. It was so good.
I can't wait to read the third book, and I really hope Pettersen's other books get translated.
Posted by Marie - Pages To Explore at 8:52 PM