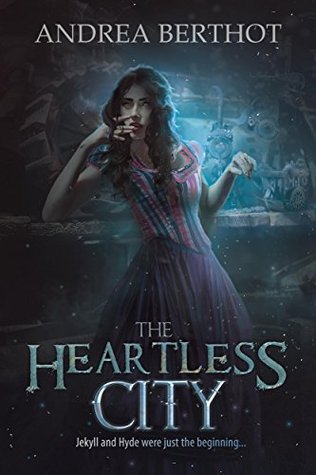 Synopsis:
Henry Jekyll was a brilliant doctor, a passionate idealist who aimed to free mankind of selfishness and vice. He’s also the man who carelessly created a race of monsters.
Once shared secretly among the good doctor’s inner circle, the Hyde drug was smuggled into mass-production - but in pill form, it corrupted its users at the genetic level, leaving them liable to transform without warning. A quarter of the population are now clandestine killers - ticking bombs that could detonate at any given moment.
It’s 1903, and London has been quarantined for thirteen years.
Son of the city’s most prominent physician and cure-seeker, seventeen-year-old Elliot Morrissey has had his own devastating brush with science, downing a potion meant to remove his human weaknesses and strengthen him against the Hydes - and finding instead he’s become an empath, leveled by the emotions of a dying city.
He finds an unlikely ally in Iris Faye, a waitress at one of the city’s rowdier music halls, whose emotions nearly blind him; her fearlessness is a beacon in a city rife with terror. Iris, however, is more than what she seems, and reveals a mission to bring down the establishment that has crippled the people of London.
Together, they aim to discover who’s really pulling the strings in Jekyll’s wake, and why citizens are waking up in the street infected, with no memory of ever having taken the Hyde drug…
Heart-eating monsters, it turns out, are not the greatest evil they must face.

This book instantly drew me in. The setting and the characters were so interesting that I couldn't help but be drawn in right away.

Iris is a pretty interesting character. Sadly, the synopsis gives away who she is. It would have been nice to be left guessing a little about who she is, as well as who her father is. It's never said outright until the end, but enough clues are given that it's not hard to guess.

This book was focused a lot around the mystery of what the Lord Mayor is up to. I had a good number of theories of what he was doing, and what I thought was mostly true. I won't be telling my theory since it's best to know as little as possible going into this book.

Elliot was, a weird character. I'm still not completely sure how much I like his character. Or if I even do or not. At times he expected others to be honest with him, but he was hardly honest with them. But he was a decent person and wanted to do the right thing, even when he wasn't sure what that was.

The side characters added some decent side plot lines and added to other characters' personalities. But this story, at times, did focus a little too much on Elliot's growing feelings for Iris and the romance that Cam had with a secret person, who I had a feeling he had feelings for considering how Cam's father, the Lord Mayor, treated him.

This book was really well written and really interesting. I liked more about this book than I didn't. The things that I didn't like as much about the book were still things that I liked I just would have preferred the story to focus more on the mystery of the Hydes rather than the romance aspect of the story. Also, I feel the ending was a little rushed. The majority of the action and discovery were with-in the last 20 pages of the book.

I still highly recommend this book to anyone that likes this genre of book. And even those that don't generally read this genre.
Posted by Marie - Pages To Explore at 11:27 AM